skip to main | skip to sidebar

... which refers to not just an end but completion, the attainment of a goal. Very few of us will ever win, finally and for all time, the goals we seek: perfect happiness, enlightenment, the discovery of an authentic self or true love can only ever be momentary; but we try. This blog has been part of my trying, and though I'll never quite find the balance I want, I have written out myself to a point of calm and understanding. Finis.

I want to channel my words, my thoughts, my creativity elsewhere. I want to close some doors and open some windows, and lose and gain on other swings and roundabouts.

Thank you for reading and talking to my blog self. 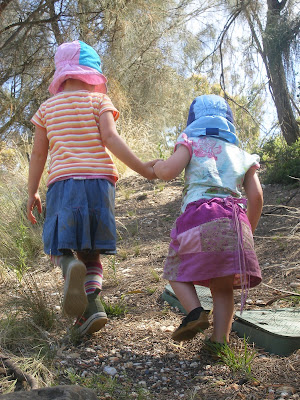 Last weekend we were up in the area, bumbling around when a man limped by and stopped to chat, wanting to know what the space was. And he said, "what a pity no one uses it".

In the past five years we have walked the dogs, watched sunsets, made plans, picked blackberries, collected kindling and sticks for my bean teepees. I have watched my kids learn to climb rocks and trees, to swing, to run down hills and climb back up them. We have eaten plums, picked flowers and jumped back and forth across the tiny creek. We have had picnics. We have played endless hours of Skippy the Bush Kangaroo. This is where I have noticed my babies growing into children.

I know what 'use' is code for, and I don't like it. I wonder how a dozen big houses sitting in ashphalt, with small backyards and big garages, could possibly prove a richer use of this space. To wipe out the mysterious, the possibility of adventures, in favour of sitting on a couch or mopping the tiles in the family room shows a lack of imagination and a misunderstanding of what space can mean for children and their families. I very much hope that guy is not sitting on the local council.

I pointed out that we were, in fact using it. (That families do in fact, exist.) And he had the grace to look a little discomforted. He tried to make things right by saying, the place could at least be tidied up a bit. I let it lie. Because if a person prefers concrete paths and banks of azaleas, there'll be no changing their mind. 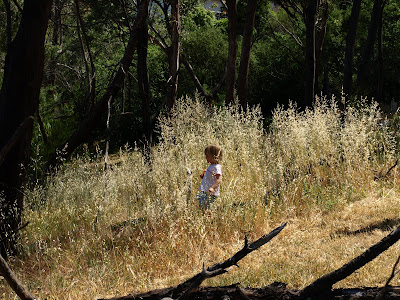 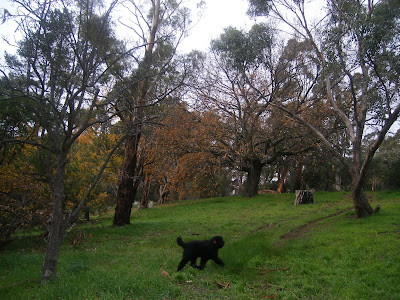 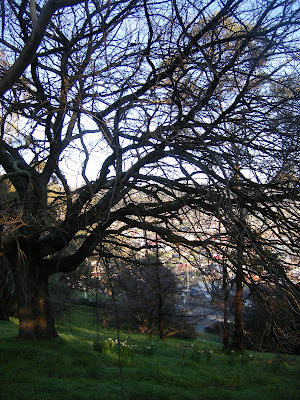 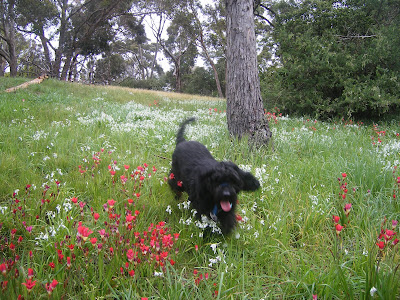 Labels: my town
It's like a switch has been flicked: it's now cold in the morning, so cold I walk into town wishing for gloves; three weeks ago it was hot.

Yesterday I smelled the first wood fires that keep people warm in my suburb. In the past few years that smell has come to conjure both the peak of dry and dangerous summers and their end. It can't be the scent of comfort and home that it once was.
Posted by Kris at Friday, March 06, 2009

I can't hear myself think. The clamour of work and now, for the past week, as Al travels for his job the girls' constant demands, have muffled my more intriguing words. my mind of words. I feel the desperation rising.

And then Al returns, with presents for the girls in the time honoured tradition. And a present for me: West Germany pottery from the 1960s. And something more valuable: space and time and quiet. He takes the girls for an adventure around the block and I wander the garden, checking the seedlings, plucking and pulling the green. Then I sit on a rock in the sun and eat four blood plums that have, for the first season since wwe've been here, escaped the birds.

Lucy and I are playing with her dollhouse, with Lucy scripting as usual:

Well, now that we've finished the biscuits, let's have a conversation.
[pause]
So, what shall we buy next week?

I fear we have not opted out of the consumerist society quite as much as we think we have.
Posted by Kris at Friday, February 27, 2009

I sit on the couch and watch it, alone, with Al in Hobart for work. I am frozen with horror at the 1950s approach. It doesn't ring true, this pitting of baby against parents in a battle for control, and it seems very cruel to me.

But more distressing is the mother of twins, weeping at putting her newborns out in the cold for hours, to 'blow the cobwebs off them', weeping because it seems so wrong and being told by partner and nurse to do as she's told. When both my kids were born, my self was disassembled, my confidence gone. But there was no-one standing by to tell me I was foolish, that I needed to back off, shut up, and let go of any last shreds of belief in myself and my knowledge. I was surrounded by people who trusted me.

It was painful to watch that woman so firmly put in her place.
Posted by Kris at Thursday, February 26, 2009

Last night I went to hear Henry Reynolds, Peter Cundall and Buck Emberg talk about survival in a recession. They were charming - Reynolds is truly all that a public intellectual should be; even his hair is exactly right - and sometimes thoughtful (except for H.R. who is always thoughtful, never anything but).

Pete's main point: plant potatoes. And build more community gardens to foster connections between people and counter racism. Gardening can save the world. You'd expect nothing else from the classic materialist. I was at peace with my decision to grow more flowers but after listening to the praises for potatoes, my inner peasant has emerged and I'm wondering if a bed of purple sprouting broccoli would do a better job at recession-proofing our household than roses ever could.

Both P.C. and B.E. were so individualist in their proposals to something that will alter whole communities. Plant potatoes, help each other, get rid of debt, live with less. Yep, yep, yep and yep: it all sounds very possible. But then I talk to a friend, a financial planner, ironing his shirt before he goes to sit behind a desk and tell people to invest in gold, and he mentions scenarios that make me feel cold inside, cold for the people who are waiting for the axe to fall, and for those who've already got the chop. (And all the while his kitten bats at the striped shirt).

And I think perhaps that for many people, planting potatoes is not going to be enough.
Posted by Kris at Thursday, February 26, 2009

Kris
Tasmania, Australia
I live and work in a small town with my family. This blog is about gardening, working, eating and our life together as a family.